“Very talented writer. Enjoyed reading it very much. Hope to see a lot more children’s books from him. Illustrations are also very cute!”

Ahoy, mateys! In a few short weeks, it shall be one year since the release of Dead Skin Dave, the Pirate! To commemorate, the paperback copy of the book will be on sale for a limited time starting pretty much as soon as you read this!

As always, you get the e-book FREE when ordering the paperback through Amazon.com!

Be sure to check out all of my Junior Pirate activities by clicking the Dead Skin Dave tab on the menu!

Now is a great time to buy or order a few extra copies for your friends, family, co workers, church, neighbors, homeless guy down the street, your post man…. 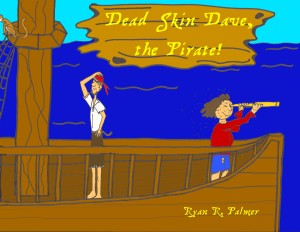 Once upon a time , there was a short, skin-peeling mess of a pirate known to the world as Dead Skin Dave. Dave wanted nothing more than to impress his fellow pirates, but he rarely succeeded. Then one day, the feared Hairy Hazelroth sank his ship and left him stranded on an island full of wanna-be pirates!
Join Dead Skin Dave, the Pirate, his dim-witted first mate, Tom Swiftfellow, and the evil Hairy Hazelroth, as they face off across the high seas for the legendary lost cutlass o’ Captain Bo Ben in an adventure full of laughs and swashbuckling action!

What if I told you there was a book equivalent of The Goonies with a bit of Stand By Me thrown in there. And what if I told you it was a coming of age story that dealt with realistic kids? No super powers or vampires.  Well my friends, that book exists, and it is called Saltwater Taffy by Eric DelaBarre.
From the book’s website: ” Saltwater Taffy is set during the 4th of July weekend and follows the lives of five “tweenage” friends as they uncover a treasure map leading to the Lost Treasure of Jean Lafitte.  The discovery thrusts them from one treasure hunting adventure to the next as they try to out-wit, out-think and out-maneuver everyone from a one-legged junk yard man and an overbearing town bully, to the creepy old man living at the top of the hill.”

Why it is a fantastic adventure: Friendships are the lifeblood of our youth. They are what keep kids going. They live for after school and the weekend, when bike rides lead to adventures and the only limit is imagination. Your kids will undoubtedly value their friends more after reading this story.
This story takes place in the 1970s, before cell phones, Internet, computers, etc. If anything, your kids will be able to read about a time when life was a bit simpler. This will hopefully inspire them to get out of the house more often and go explore the town with their friends.
Treasure hunting is something that excites all of us. Whether we’re kids, tween,s teens, adults or seniors, we have all been bitten by a treasure hunting bug at least once. The story in this book will ignite your kids’ imaginations. Get ready to create your own treasure hunt because as soon as they are done reading this book, your kids will be pumped for an adventure – and what better way then with a treasure hunt!
This book really hits a lot of great themes in a young person’s life. I’ve told you about the friendship aspect. There is also a great lesson about learning to stop aiming so high because what you want is probably right in front of your face. This is always a great lesson to teach kids and is a great reminder for adults. Be happy with what you have! Loss of someone close to you is also dealt with in this book, and it is not just a tug at the emotions, but a great way to open dialogue with your kids about loss and what it really means.
Overall, Saltwater Taffy is an amazing coming of age adventure, with strong friendships, life lessons and even a treasure hunt. It truly is an all in one pack 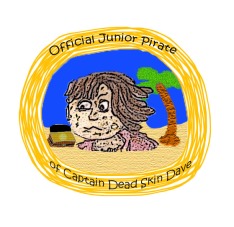 From the Manufacturer: Come aboard and sail to Pirate’s Cove… the legendary hideaway of thieving pirates and cutthroat buccaneers. The tales of those legendary pirates of old who’ve fought and survived these mysterious waters still haunt all those who yearn for a life at sea. Armed with a secret map and starting with a modestly outfitted sloop salvaged from last winter’s storm you set sail to Pirate’s Cove — your eyes filled with visions of treasure and fame your lungs filled with the salty air of the High Seas. Your objective: to battle for the rights to plunder and become the most famed and feared Pirate the world has ever seen. To do so you will need to navigate shrewdly fight recklessly and pillage mercilessly. You will gain fame by winning battles; burying gold and treasure; and bragging about your exploits at the Tavern. At the end of twelve months the pirate with the most fame will be declared the most fearsome Pirate of the High Seas!
Arrrrrrrrrr ye ready for a game of swashbuckling and daring, mateys? In Pirate’s Cove, you’ll battle for the rights to plunder and to become the most famed and feared pirate on the seas! Win battles, bury gold, and boast of your exploits at the tavern. Sail the islands off Pirate’s Cove in your quest for fame and fortune – navigate shrewdly, fight recklessly, and plunder mercilessly! At the end of twelve ‘months,’ the most famous of the pirates wins! Includes game board, 7 pirate ships, 5 player mats and navigation wheels, 60 treasure cards, 6 pirate cards, 42 tavern cards, 75 wooden game markers, 6 dice, reference map, and rules. For 3 to 5 players ages 8 and up.

Put this game on your next birthday wish list. This game is perfect for kids 8 and up and is actually a lot of fun for adults, too! 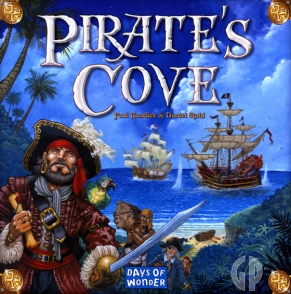 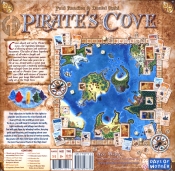 Woo, another promotion for Dead Skin Dave, the Pirate! It never has been easier to get my latest book for cheap!

For the next four days, you can purchase the eBook for only $0.99! That is in addition to the buy the paperback, get the eBook free promotion.

What’s yer excuse mateys? Get on board with Dead Skin Dave as he searches for the Legendary Lost Cutlass of Captain Bo Ben!

Hello, folks! I know I said I’d take the day off, but Amazon just launched a great promotion that I would like to share with you.

Starting today, all purchases of the paperback version of Dead Skin Dave, the Pirate! will allow you to download the eBook for your Kindle device or app absolutely FREE!

Now you can take Dead Skin Dave with you wherever you go! Let your kids read it on your iPad, smartphone or Kindle device It’s a great way to always keep your kids reading!

Just add the book to your cart, checkout and the eBook version will be made available to you for free.

There is nothing quite like a Halloween party. Whether its bobbing for apples, carving pumpkins or eating caramel apples, there is never a dull moment for kids and parents. Here are a few spooky ideas for a hauntingly great Halloween party! (How many more Halloween clichés can I post this month? I think I’m running out!)
Halloween Music Collection by Midnight Syndicate. Put on this CD and get ready for some of the creepiest music you will ever hear. Midnight Syndicate  is a band that plays nothing but creepy music for Halloween. This CD is sure to send some chills down your spine.

Jack-o’-lantern…lanterns. Okay, the name leaves a little to be desired. But hey, these paper lanterns are a very easy way to add Halloween flair to your backyard or front porch. They are also practical in that they provide light! How about that?

Jack-O’-Lantern Chair Covers. I’m sensing a jack-o’-lantern theme here. Apparently I really like them. These are a clever way to add some Halloween to your otherwise boring and bare dining room table chairs.

Little Monsters Photo Door Banner. What happens every time you go to a fair or theme park and your kids see those wooden cutouts to stick their face in? They run to it every time. And demand lots of pictures to be taken at every single one they encounter. Now you can have one in your own home! Seriously, kids love this and your house will forever be known as the photo house.

Skeleton Butler with Tray. Place this guy jus outside of your kitchen, bar, or wherever it is you serve your drinks for the party. Place a few drinks on here and you have your own skeleton butler holding drinks for every one. The parents will love having easy access to drinks and the kids will get a kick out of a 5 foot skeleton greeting them (and they can’t reach the drinks).

Frankenweenie Stand Up. Okay, I’m putting this one in here because I love Tim Burton and I think this is a great idea. What kid wouldn’t want Sparky to attend his Halloween party?

Today is the last day for your free e-book copy of Dead Skin Dave, the Pirate!

Grab it while ye can, mateys!

And  please leave a review after you’ve finished!

Say goodbye to Summer and hello to Fall with one last pirate adventure!

Dead Skin Dave, the Pirate! e-book version will be FREE for the next five days!

Today’s entry in Fantastic Adventures in Family Entertainment is the little known high seas adventure, Shipwrecked.
The story centers around a young boy, Haakon, who sails off as a cabin boy in order to save his family’s home. Little does he know, the ship’s captain and crew have all been replaced by pirates, who need the ship to return to a deserted sand to dig up their gold.
Young Haakon, shipmate Jens and stowaway Mary discover the pirates’ plan and are forced to walk the plank in the middle of a storm. Haakon washes up alone on a deserted island and soon discovers it is the hiding place of the pirates’ treasure. Can he recover the treasure before the pirates return? Will he find his friends? Most importantly, how will he get home?

Why it is a fantastic adventure: A young boy must survive on his own on a deserted island. Your kids will experience all the classic survival stuff: building shelters out of palm trees, weapons out of sticks, and eating coconuts and fish. A sense of exploration is crucial to your kids’ upbringing as creative individuals. They will be in Haakon’s shoes as he creates booby traps, fights for survival and attempts to stop the pirates from getting their treasure.
Haakon is a great young character for your kids to look up to and identify with. He handles himself with poise as he is stranded alone with nothing but his instincts and smarts. Your kids will be itching to go on an adventure of their own, and don’t be surprised if you walk in to your living room being converted into a deserted island.
This movie is a great way to let your kids explore their imaginations and get them to do creative things with whatever they have laying around the house. Since they will be pretending they are on a deserted island they will be making radios out of coconuts and shelters out

of bed sheets. If you happen to have an indoor palm tree, expect that you will no longer have it in the near future!
Overall, Shipwrecked is a fantastic adventure film safe for the entire family, and your kids will bond with Haakon and his island adventures.

Shipwrecked is available on DVD on Amazon.com